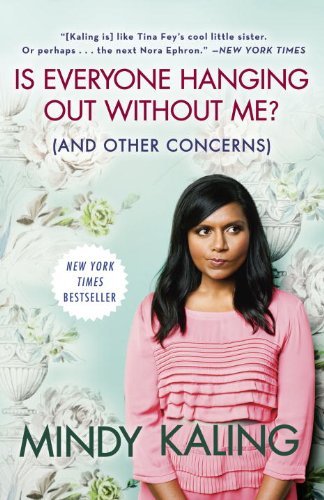 Both Tina Fey and Mindy Kaling (after this, I’m going to refer to them by their first names – they’d totally be cool with that, right?) are comediennes, write for and act in an NBC sitcom – 30 Rock and The Office, respectively – and have perfected that blend of quirky, quick, and intelligent humor. When each debuted an autobiographic, humorous collection of essays/contemplations, I had a feeling that both books would just be FUN.

And they were! I read them in successive order during a time that was really stressful in a lot of ways, and each book provided plenty of hilarious moments and light-hearted entertainment.

Biggest surprise for me: as I’m a bit more familiar with Tina based on her Saturday Night Live resume, I thought I would love Tina’s book, Bossypants, more than Mindy’s. However, Mindy’s Is Everyone Hanging Out Without Me? (And Other Concerns) provided the most genuinely enjoyable anecdotes for me, moments so hilarious that I even handed over the Kindle to my husband at a few points because I just had to share with someone (and yes, he got a kick out of her crazy musings too!).

In the midst of the humor, I also felt like I could relate more to Mindy, and many of her ‘concerns’ struck me as real and awesomely accurate to the life of any 20 to 30 year old. I could definitely relate to her writing ‘process,’ which is inspired yet also diverted by the Internet. Right between a picture of her beautiful yet unused office and one of Mindy in her actual writing environment (in bed with a laptop resting on her Notre Dame sweatshirt, looking as if she’s “recovering from tuberculosis”), she discusses one writing distraction:

The Internet also makes it extraordinarily difficult for me to focus. One small break to look up exactly how almond milk is made, and four hours later I’m reading about the Donner Party and texting all my friends: DID YOU GUYS KNOW ABOUT THE DONNOR PARTY AND HOW MESSED UP THAT WAS? TEXT ME BACK SO WE CAN TALK ABOUT IT!

Mindy also specializes in making awesome lists about anything, including: alternate titles for her book (like “The Girl With No Tattoo” or “The Book that was Never a Blog”); ‘non-traumatic things’ that make her cry; movie and reality tv show pitches; franchises she would like to reboot; what guys need to do to be great (almost nothing); and her top favorite comedy moments, amongst others. Her book is incredibly readable – you can pick it up at any time and at any chapter and get right back into hysterically laughing or knowingly rolling your eyes in agreement with her.

Much to her credit, Mindy’s writings on her very normal childhood (where she recounts her experiences being a tad overweight, finding out she was a true non-athlete, going through friendship trials, crushes on popular guys, etc.) entertain just as much as her later stories about Hollywood and her life now. She candidly dishes a lot more about Hollywood and celebrities like Steve Carell than Tina does in her book and definitely provides more of an authentic, behind-the-scenes glimpse into her celebrity, yet down-to-earth, world. Additionally, both Mindy and Tina’s discussions on their famous friends and their own lives are done in a classy, intriguing way (there is really nothing scandalous at all in Mindy’s book, and that is a compliment – I’m still a bit scarred from reading Melissa Gilbert’s (aka Laura Wilder from Little House on the Prairie) autobiography – yikes!)

In contrast, Bossypants seems a bit more focused on collecting Tina’s thoughts and polishing her commentary on what it means to be a female comedian in a mostly male industry. She discusses being a working mother and raising well-adjusted children. She desires to give her own daughter what her father gave her: “the gift of anxiety. The fear of getting in trouble. The knowledge that while you are loved, you are not above the law. The Worldwide Parental Anxiety System is failing if this many of us have made sex tapes.”  Loved the section where she discussed parodying Sarah Palin on SNL – Tina writes candidly but still respectfully on these kind of interactions.  And of course, any Saturday Night Live buff will have to pick up Bossypants; she truly does discuss a lot of the day-to-day during her tenure there.

Both books offer a really enjoyable reading experience, and even though I did think Tina’s picked up a bit in the middle, I definitely would grab Mindy’s for a reread on a day I needed a cheering up or just a genuine laugh.

Simply based on my interest level and overall entertainment factor:

Is Everyone Hanging Out Without Me? (And Other Concerns):
A
Bossypants:
B